A quick Q&A with Jim Trick, opening for Monica Rizzio on Saturday in Mansfield

Jim Trick was born to be on stage.  The Marbelhead artist has a special knack for singing songs and telling stories that connect to people’s hearts in a big way.  He makes every audience member forget their worries and brings them into an extraordinary place of caring, healing, and warmth.  It’s been a pleasure and a thrill to watch Jim mature as an artist, playing to new audiences and winning them over with his music, his words, and his smile.

Trick will open on Saturday for the Cape’s Monica Rizzio at the Rose Garden Coffeehouse, 17 West St., Mansfield, Mass. Tickets are $16 in advance, $20 at the door. 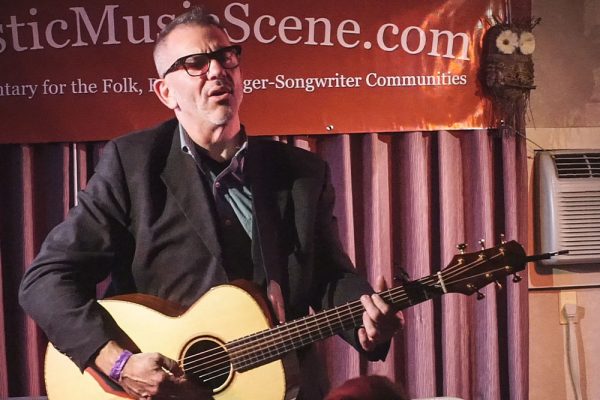 What can you tell us about the highlights of this past year?

Well it has been a busy year, that’s for sure!  One of the highlights was opening for Vance Gilbertat the Guthrie Center in Great Barrington.  This, as you know, is the old church building that Arlo Guthrie wrote about in the famed “Alice’s Restaurant.”  I was musically raised by my siblings and my brother Joe always had that record out.  I can still see it leaning against one of the countless milk crates filled with every kind of album imaginable.  That iconic image of Arlo, sitting shirtless at at dinner table has been burned in my brain as long as I can remember.

I arrived in the afternoon for an evening performance and was welcomed warmly by George who has been Arlo’s go to guy for forty years.  I asked if I could look around and he invited me to make myself at home.  Sitting in the big room I was overcome with emotion and called my brother on the phone.  I needed to thank him and share the moment with someone who would get it.  It was beautiful.  Not to mention that I got to be with Vance Gilbert!  Vance is not only an incredible artist but he’s a really beautiful person.  He has been so kind and supportive.

You’re always making friends out of strangers. Tell us about some of the most interesting people you’ve met lately.

Ok, let’s see… Well, when driving home the day after that show I stopped for breakfast at a random diner.   I sat next to Al.  He had retired from a chemical company and was now driving a school bus to stay busy.   We talked and talked about everything under the sun. Got really deep, really fast. It was as if we had known each other for years.

Al is a large African American man and our breakfast was a day or two after another black person had been shot.  It didn’t come up in conversation but it crossed my mind that there are a million isms that keep people from connecting.   Age-ism, size-ism, sex-ism and so on.  I think if we are honest, everyone holds some kind of ism and it may even be a judgment that they hold against themselves.    Self-ism?

Bottom line is we are all the same.  Humans want love, connection, to be seen and understood.

I was thinking I would pay for Al’s breakfast but he beat me to it.

Here’s a video of Jim singing “Care a Little Less.”

Have you had any ear worms recently—songs that you just can’t get out of your head?

I am listening to Ellis Paul’s song “Rose Tattoo,” over and over and over again.  I think it’s annoying my friends at this point.  It opens with the line:

“I got laid off, it’s Monday and I’m calling to tell you it don’t sit with me well.  I feel like I failed you”.

It’s just so gorgeous, and conversational and honest.  I love it…

Also, Lyle Brewer has a solo album out called Juno.  It’s a beautiful record and I spend a lot of time with it.

Are you writing these days?   What is inspiring you?

I actually have a bunch of songs from the last two years that are ready for a record but I think I might be putting that off for something that is right under my nose.

I bought a 1961 Gibson C1 classical from a friend a few years ago.   The top was caving in and it was in serious disrepair but it felt and sounded like butter.   I had it structurally restored by Peter Meyer and it’s even better.   I plan to release an EP of songs written for that guitar. 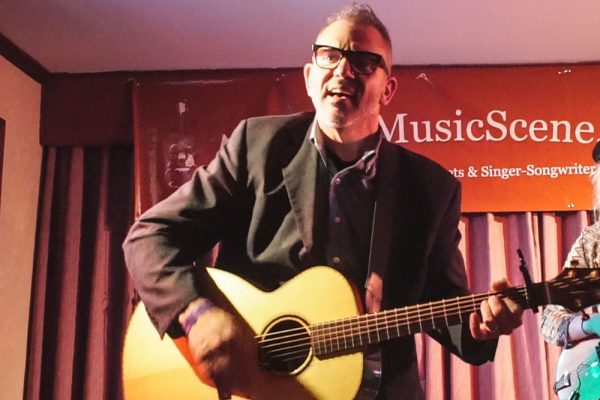 Have you been inspired by any musicians, writers, artists recently?  And, if so, how does their work speak to you?

Korby Lenker’s book Medium Hero is a collection of semi-autobiographical short stories.   I feel inspired by his writing but there is more to it than that.  His work conveys an incredibly tender, connected heart without ever seeming soft.  There is a solid masculinity conveyed in his writing even when he is describing the love affair he has for his cat.

He is also a wonderful songwriter, which kinda makes me want to punch him…

You’re a regular speaker at Berklee College of Music.  What advice do you give to young musicians?

My time with Berklee students is less about advice and more about providing tools for decision making.   There is a thing that happens when you introduce a person of any age to their values and invite them to make life choices from that place.   I’ve never had a hit or won a Grammy, but I’m not chasing those things.  What I have done is transformed my body and professional life into a seriously satisfying configuration.   Ralph Jacodine has become a dear friend and he really sees his work at Berklee about making an investment in the future.  I get to be partnered with him in it and we always walk out of our time with students blown away with the results.

You’ve been doing considerable work with Banding People Together — working with business leaders and helping them engage with each other so that they can go back to their office and be better leaders.  What tools are the most important ones for people who work in teams?

It really begins with leaders being sure to give people a voice.  Corporate culture is full of C suite leaders who go to their people and say things like “Ok people, work better together!”.  They call for collaboration without even knowing what collaboration really is.  We call that collaborative insanity.  When a person has a voice then they can contribute.  There’s so much more to it but it begins with giving people a voice.

Kathy Sands-Boehmer runs the Me & Thee Coffeehouse in Marblehead, Mass.