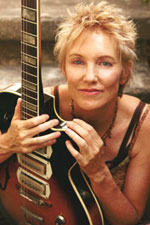 Eliza Gilkyson blew me away years ago with her CD “Land of Milk and Honey.” That CD was nominated for a Grammy. It had me wondering where she came from, and why I had missed her music all these years. That CD, with its anti-war plea and calls for peace, seemed to peg her as a “folkie.” Though clearly, she has the power of a rocker, and the lyrics of a poet. Her stuff just clicks, kind of like the first time I heard Lucinda Williams.

Eliza’s latest, “Beautiful World” (Red House Records), is apocalyptic and joyous all at once in a variety of styles, from rock to jazz to folk. Her songs are about love and beauty in a tumultuous world. She taps the urban need to escape in the tenderly picked “Wildewood Spring” and rejoices her way through the rocker “The Party’s Over.”

Playlist of clips by Eliza Gilkyson
Clips include “The Party’s Over” and “Dream Lover.”

She is at her lyrical best in “Great Correction,” which reveals all our flaws and offers a warning:

Great Correction was the first song written for the CD, apparently inspired by monthly gatherings around Austin, Texas, that covered topics from politics, to art, spirituality and the environment. In her press release, Eliza is quoted as saying she wrote the song “as a way to console myself as I grieve the devastation of the human and natural world.” But after writing it she was inspired to write songs of hope and a better world.