There is something special when the father-son duo of Taylor and Jake Armerding take the stage. In Taylor’s early days, as a founding member of the progressive bluegrass band Northern Lights, he would invite Jake to perform onstage with the band. Playing fiddle at 13-14 years old, Jake would wow the audience with abilities that seemed far beyond his age, almost stealing the limelight from the band. His affable nature endeared him to audiences, and encouragement from his dad no doubt set the stage for Jake to launch his own musical career.

The duo will be together this Saturday, May 16, 2009, for the season-ending show at the Rose Garden Coffeehouse in Mansfield, Mass. In addition to the special nature of this father and son performance, they will be bringing with them a full complement of musicians and both will be releasing new CDs. For Taylor, this is his first, a birthday and Christmas gift from his son.

In addition, the Rose Garden will hold its 17th annual performing songwriter competition. Finalists this year will include Garrison Doles of Orlando, Fla.; Lynne Hanson of Ottawa, Ontario, Canada; and Chris Elliott of Leverett, Mass.

For Jake Armerding, 31, who got married in this past year, it comes as no surprise that his fourth CD, “Her,” is a collection of songs about love and relationships. “For years I’ve been trying to get away from love songs,” says Armerding, who also plays guitar and mandolin. “Everybody writes them, they’re the easiest to write, all that stuff. But then I fell in love and got married, so it wasn’t really an option.”

Here are some song clips from Jake’s new CD:

Jake has become one of the most melodically and lyrically gifted songwriters on the circuit today.  His songs continue a trend of defying easy characterization. His deft use of electric and acoustic instruments, keyboards and percussion never hides lyrical impact, leaving his tender tenor vocals out front. His songs vary from acoustic folk, to jazz, to bluegrass, to Latin and more. They can change the mood from the distant and sadly affecting “I Came Upon Some Love Today” to the joyous opening track “Up On The Rim”:

“How did I find
True love with a friend of mine?
Just a boy and a girl
But it still feels just like a miracle”

I found myself singing along and hitting repeat on the CD player to songs like “$2 Kite,” about being torn between love and friendship, and the celebratory “Song of Solomon.” The latter is a country-folk melody that has a duet with Taylor, warm vocal harmonies that mingle with fiddle, and an anthemic chorus:

He sings a confrontational love-dismissal rant amid power-strummed acoustic guitar in “Harry/Sally.” In “Porto, PT (Portugal)” jazz horns, clarinet and Latin rhythms tell the story of love lost to the lure of a travel poster on a wall.

Pensive electric guitar pushes the impassioned love song, “Dying Light,” while “Summer of My Life” offers lush harmonies and devotional lyrics that could be wedding vows:

“You are my marigold
spring’s daughter
You are my drink of cold
well water
And you are my girl next door
who lives with me
I could not love you more
Somehow I do, I do.” Taylor Armerding, 60, a columnist for “The Eagle Tribune” in Lawrence, Mass., spent 28 years as the Northern Lights mandolin player and front man. Now he performs in a trio with Jonathan Edwards, the Bluegrass Gospel Project and with an occasional collaboration called Barnstar (consisting of guitarist Mark Erelli, banjoist Charlie Rose, bassist Zack Hickman and Northern Lights fiddler Mike Barnett). He said Jake comes from a musical family (both of his grandparents also were musical), and that he was exposed to many kinds of music growing up. Taylor said he’s proud of Jake’s accomplishments, and especially his writing. “Some of these are among the best he’s ever done,” Taylor said.

Taylor’s birthday and Christmas present from Jake was his first solo CD project, called “Head That Way,” a collection of blues, bluegrass, bluegrass gospel and folk favorites, with Zack Hickman on bass, Mark Erelli on guitar and vocals, Lincoln Meyers on guitar, Greg Liszt (Crooked Still) on banjo and his youngest son, Jesse Armerding, on drums.

Taylor joked that he toyed with calling the CD “Breaking Old Ground,” because most of the songs on the CD he had already recorded with other groups. But the real gift, he said, was that his son also put together the band for his recording. “I couldn’t have assembled a better group of players,” Taylor said. “It was Dad and the kids.” He said, for him, the CD is a kind of retrospective, adding “being at the age that I am, it’s kind of nice to have them all in one place.”

Though he knew the group members  ?  most introduced through his association with Jake  ?  he had never worked with them. “It was an amazing experience,” Taylor said. “We knocked out 13 songs in two days. It was a blast.”

Here are some song clips from Taylor’s new CD:

The CD includes songs that followers of Northern Lights will recognize, most notably the band’s signature train song for many years, “Northern Rail,” along with “City on a Hill,” both written by Taylor. He said he had never recorded until now a couple of songs in his repertoire, the original “Company Town” and the Dillards’ “Old Home Place.”

Taylor’s vocals soar in the classic bluegrass gospel of “Working on a Building” and offers up some fine harmonies in the Louvin Brothers’ “Cash on the Barrelhead.”

Armerding said he’s looking forward to his return to the Rose Garden. He’s performed there in many of the coffeehouse’s 20 years. He attributes it to the venue’s ability to bring quality acts to the stage. “The ones that survive and even prosper basically are able to establish a reputation that you can go there anytime and enjoy what you hear,” Taylor said. “The Rose Garden has a loyal following, but I don’t think you get a loyal following if it’s uneven.”

The Rose Garden Coffeehouse, held at the Orthodox Congregational Church in Mansfield, Mass., opens its doors at 7:30. The show starts at 8 p.m. Click for a map. Tickets are $18 at the door, $16 in advance. For information, visit the Rose Garden web site at www.rosegardenfolk.com or call 508-699-8122. 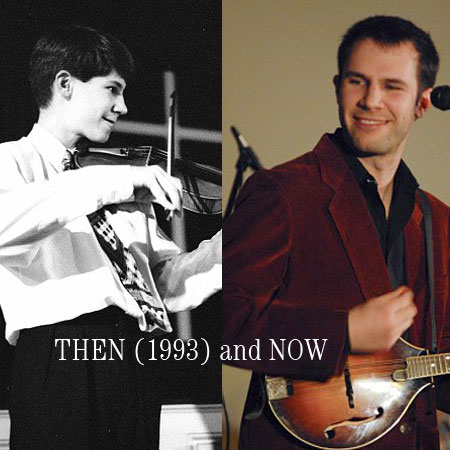 Jake Armerding performed with Northern Lights in 1993 at the Rose Garden Coffeehouse in this before and after photo montage.