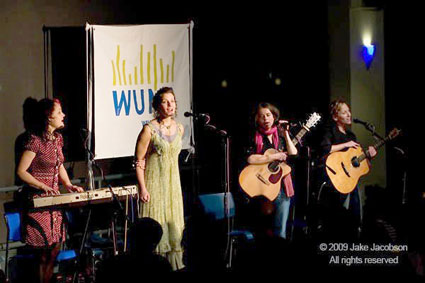 On a wintery November night, four highly accomplished women singer/songwriters cast a warm glow over more than 200 people this past Wednesday night at one of WUMB Radio‘s free member concerts. The quartet — which includes Antje Duvekot, Natalia Zukerman, Anne Heaton, and Meg Hutchinson — combined original and traditional holiday fare and presented it in a most imaginative way. The title of their brand-new, debut album says it all — “Winterbloom: Traditions Rearranged.”

Each woman has a successful solo career going for her, but the real magic materialized when they joined forces for this special seasonal project. They combined their voices and instruments (guitars, keyboard, and Dobro) on familiar chestnuts like “O Holy Night” and far lesser known gems like Anne Heaton’s “As You Are.” In each case, the arrangement was crafted with great care and creativity to produce a sound completely different from what might have been expected.

My personal favorite? It was “Silent Night,” actually sung in crystalline 4-part a cappella harmony in German! It was breathtaking. Just to hear “Stille Nacht, Heilige Nacht” was worth the price of admission. Come to think of it, there was no price of admission for WUMB members. Thanks, WUMB! I complimented Antje on “Stille Nacht, Heilige Nacht” and she said that’s the way she always heard it in her native Germany when she was growing up. What seemed so unusual to the audience was completely natural for her.

After this debut performance in Boston, the show goes on the road to New York City; Washington, DC; Cedar Rapids, Iowa; Rockland, Maine; and numerous other stops in between. WUMB (91.9 and streaming live on the web at wumb.org) recorded the show for airing on two future dates including, of course, Christmas. Their web site should be offering full details about the broadcast. 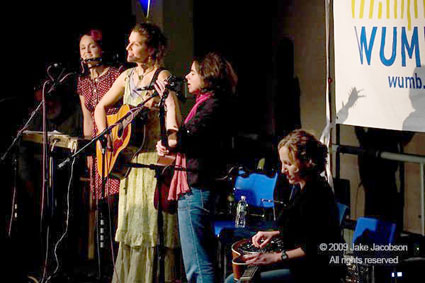