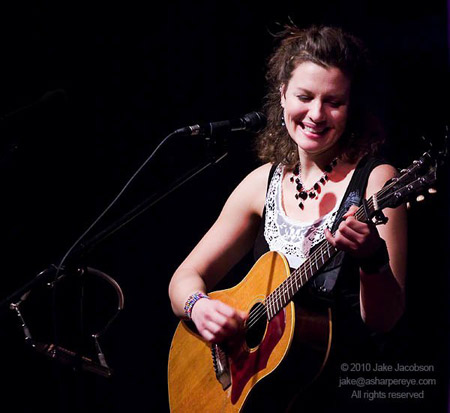 She was in top form earlier this month when she performed a show at Circle of Friends Coffeehouse in Franklin with sometimes collaborator Flynn as opening act. As usual, she charmed the audience with her nervous-schoolgirl stories between songs and floored them with her wonderful catalog of music, along with some unexpected treats (such as Gershwin chestnut “They All Laughed”).

Future concertgoers should be prepared to see a new facet of this artist: She’s bought a keyboard and is teaching herself to play. “I went into Guitar Center to get some new strings and walked out with a $600 keyboard. Ooops,” she joked at the Franklin show. Her keyboard playing that night had the air of a grade-school recital but her self-effacing humor and beautiful vocals smoothed everything over.

Fans of Flynn were treated to some news songs along with his usual vocal acrobatics, in which he occasionally pole-vaults into a high range few full-grown men can master. Flynn has no upcoming shows listed on his Web site (http://www.flynnmusic.com) but he’s worth keeping an eye out for.

– John Murphy is a guest columnist from Easton, Mass.