Bill Staines and the marvel of area house concerts 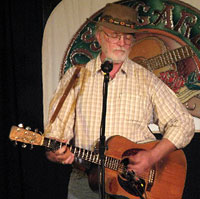 I wonder sometimes whether people around Boston appreciate about how rich their local folk music scene really is. On any given night, it’s almost inevitable you’ll find some form of music-related event going on, from right around the cities to out into the ‘burbs.

The Boston Area Coffeehouse Association lists more than 35 coffeehouses in the region. I suspect there are others who are not members of this organization. But in an era in which public broadcasting seems to be dropping its support for folk music on the airwaves, coffeehouses and folk music seem to be thriving.

Adding new meaning to the term “folk,” there are even more intimate settings in which to hear great music. I saw legendary New Hampshire singer-songwriter Bill Staines at a house concert in Franklin on Sunday. Staines, who normally plays larger venues, has been scheduling more house concerts. Such a show is literally what it sounds like. Staines performed before about 20 people in the living room of a private home in Franklin, as part of the Franklin House Concert Series run by Barry and Deborah Kasindorf.

Here are some songs from his two-hour living room show:

In the case of the Franklin series, the show was preceded by a potluck lunch, and there was a donation basket near the door. The suggested donation of this show was $15, not bad considering you may eat lunch and chat with the performer before and after the show and have premiere seating.

Prior to his show in Franklin, while eating his lunch, Staines discussed the current state of folk music, from the loss of radio coverage to the changing nature of folk music from balladeer to a more acoustic pop sound. The intimacy of the house concert gives a glimpse into the lives of these songwriters, beyond the public persona of the stage. And the room is small enough that the performers don’t need sound equipment unless they choose to use it. And, as you can tell from watching the videos, the audiences feel free to sing right along.

Last year I caught Norwell singer-songwriter Les Sampou with Taylor Armerding at the same house concert. It gave Sampou a chance to try out some new songs before bringing them to a bigger stage. From the vantage of a member of the audience, getting what is essentially a private show makes the event ever more special.

Other regional house concerts are coming up.

The Fox Run House Concert Series in Sudbury, Mass., has singer-songwriter Kevin So on May 8. So far this year, Fox Run has played host to Martyn Joseph and Sarah Lee Guthrie and Johnny Irion.

The Kiva House Concerts in Billerica already has held two concerts this year (Shane Hines and Natalia Zukerman) and has outdoor shows planned with performer Edie Carey on June 27.

The Kick Off Your Shoes House Concert Series in Topsfield has the very popular singer-songwriter Antje Duvekot on June 13. So far this year, the series has played host to Buskin & Batteau, Allison Downey with John Austin and singer-songwriter John Flynn.