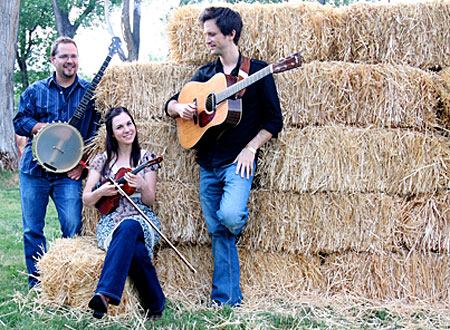 By Stephen Ide
The Patriot Ledger
Get web extras: Become a Facebook Fan

What’s a fiddler to do when the rains come? If you’re April Verch, you pick up the fiddle and play more music.

Verch, a two-time Canadian fiddle champion, was teaching at the Fiddle Star Adult Camp in Nashville when the floods hit the city in the last week.

April Verch dances at the Rose Garden in 2007. Photo by Stephen Ide

“When camp was over we couldn’t get people to the airport to leave camp,” said Verch by phone from Nashville. “Essentially everyone was without power, holed up for an extra day together, and it just led to another day of making music, and people really couldn’t get out. It wasn’t so bad in that way. Everybody was thrilled to have more time together.”

Verch said she saw some of the flooded areas in Nashville, and worries still about friends and musicians she knows there. While in Nashville Verch was working on songs for her eighth recording.

She is about to begin a tour of the Northeast, including a return visit on Saturday, May 15th to the Rose Garden Coffeehouse in Mansfield, Mass., one of her “favorite” locations to play since she began touring full time 10 years ago. Joining Verch will be Cody Walters on bass and banjo and Clay Ross on guitar.

Playlist of songs by April Verch

“We’ve been back to the Rose Garden a few times,” she said. “We kind of get to know people and we’ve always been really well-received there. People have been really warm and we kind of feel like, like we have friends in the audience. Not just audience members.”

“And of course I’ve become really good friends with Mac and Rae Ann [McLanahan] and it’s special for me to play there for that reason, too. I think the world of them,” Verch said. The McLanahans are among the founding members of the Rose Garden, now concluding its 21st year.

The Rose Garden show also will feature its 18th annual performing songwriter’s competition. The contest, which has garnered national prestige, will feature performances from singer-songwriters Jim Colbert of Bellefonte, Pa., Chris Elliott of Leverett, Mass., and Larry Murante of Seattle, Wash. Visit the Rose Garden web site to read profiles on the contestants and hear clips of their music. 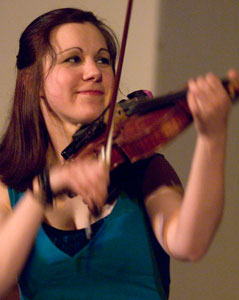 Verch has always been an endearing performer, and she remember previous years hanging out with the contestants in the “green room,” sharing notes about the music business and just enjoying the quality of the performances.

With her infectious smile and crystalline singing voice, her music is welcoming. Add to that passionate fiddling and stepdancing, sometimes simultaneously, and audiences know that she puts her all into every show. It’s hard to pin down her style because she can play anything, from bluegrass, jazz, folk and virtuoso fiddle melodies in the Ottawa Valley style. Add in sweetly sung country melodies and finely honed stepdancing, there’s not much Verch can’t do on stage.

Off stage, I’ve seen Verch at bluegrass festivals, wandering the parking lot and jamming, enjoying the presence of other musicians, many of whom pale in ability by comparison. But in her unassuming style, probably fostered by the fact that she’s been involved in music for a long time — stepdancing since age 3 and fiddling since she was 6 — she appreciates all the music around her. The former Berklee College of Music student has never let her success go to her head.

It’s no wonder that Verch was called upon to represent her country at the 2010 Winter Olympics in Vancouver. There, with the eyes of the world upon her, she joined a select group of fiddlers to represent the culture and fiddle music of Canada. To Verch, it was a great honor.

“It was an experience of a lifetime,” she said. “It was so huge that it’s hard to put it into words the magnitude of it, and being part of that event, the production that it was and what it meant for fiddle music. Canadian fiddle music, but fiddle music in general.”

In addition, performers wore traditional costumes, which added to the spectacle. 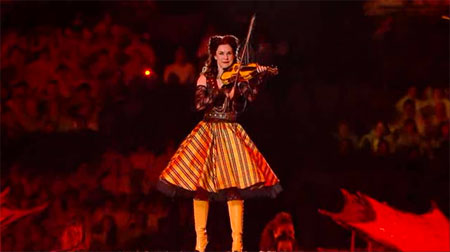 April Verch performs during the opening ceremonies in a segment called "Fiddlers from the East." Click to view the performance on NBC's web site. Verch comes in around 3:15.

“When we first got called, it was explained to us what the theme of it was, and it was to marry the fact that these were traditions that went back a long way, and the costumes were supposed to pay tribute to each style but also be modern enough to let people know that it was a thriving tradition that was alive and well. And it was still hip today. And I think they really accomplished that. But I certainly have never walked in boots that high and I wonder if I ever will again,” she laughed.

Though Verch says she was focused through the dancing and fiddling of the maple leaf spectacle, the importance of the ceremony hit her as she was leaving the stage. “We walked back to the girls’ dressing room and it was a long week of rehearsals and everything building up. So you’re emotional, you’re exhausted, you have that adrenaline, and we walked back and I kind of said to the girls, ‘we’re lucky that it’s us, and it could have been anyone.’ And I said back to them, ‘Think of the people that came before us, the fiddlers that started the Canadian fiddle tradition and what this would have meant to them to have all these styles represented to the world and that we got to do it.’  We kind of all got in a group and there were tears and hugs, and that was a special moment, too.”

As shown by her teaching at the fiddle camp, Verch enjoys giving back. She will even be performing for preschool and kindergartners from 1:30-3 p.m. May 15 at the Children’s Studio, 184 West Main Street, Norton. For information on that show, visit www.appleheart.net or call 508-285-3265.

Despite the honor of being on such a world stage as the Olympics, Verch revels in the fact that the gigs she plays are so varied, from big venues to small ones. Asked whether it is disappointing to go from playing the Olympics to playing a small coffeehouse, Verch said emphatically, “Oh, gosh, no.”

“This is a difficult business,” she said, pointing out that most of her gigs were booked before the Olympics called her anyway. “We’re lucky to make a living doing what we love. There are so many talented artists. You can have just as much of an impact on an audience, whether there’s 50 people there or 5,000. It doesn’t really make any difference.

“Some tours are smaller, some tours are bigger, but it’s kind of that mix and being able to meet everyone along the way that’s the real thrill. I would never says that it’s a disappointment at all. I mean you can’t play the Olympics every day. You’re just lucky you’ve played it once in your life.”

Videos of Verch from her previous show at the Rose Garden: