VIDEOS and a brief roundup from the 2010 New Bedford Summerfest 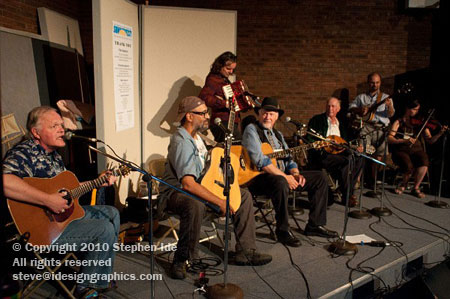 Though my visit to the 2010 New Bedford Summerfest was a bit brief, I very much enjoyed the smaller stages this year. While I’m certain the music on the main stage was wonderful, there’s a certain spontaneity when you place a bunch of musicians together, some of whom have never performed together before. Even though many of the musicians played solo and very different music, there is a collegial coffeehouse feel when folk musicians gather.

One of the sessions I attended was about songs to lift the spirit. I always enjoy hearing New Bedford’s troubadour, Art Tebbetts. Art plays some older songs and a couple of originals, and he does them with flair and in such a welcoming manner that people just want to sing along.

I’ve watched Vance Gilbert grow as an artist since first hearing him in 1991. While he hair has gotten shorter and he has thankfully outgrown his self-deprecating humor about being one of the few black folk singers on the circuit, he is so funny on stage that before he gets to his songs, you often have have tears of laughter rolling down your cheeks. His music varies from ballad style folk to blues or jazz, always well-crafted. I’ve included two videos below. I’ve purposely left out his banter: Go see Vance if you have never done so.

I was pleasantly surprised to hear Ronny Cox perform. The folk singer/actor played the guitar in the 1972 film “Deliverance” opposite child actor Billy Redden on banjo in its signature number, “Dueling Banjos.” [The tune was really performed for the film by Eric Weissberg on banjo and Steve Mandell on guitar]. It was the world’s first good look at Cox, who went on to perform in “Beverly Hills Cop” and “Beverly Hills Cop II,” “RoboCop,” various TV shows including “Star Trek: The Next Generation.” In the set I watched, Cox played some old favorites, like “When You’re Smiling” and the tender “Let Not Your Heart Be Troubled,” with Radoslav Lorkovic adding tasteful accordion.

All of the performers in this particular set appreciated the writing of wordsmith Jack Hardy, who was joined by Mike Laureanno on several instruments and his daughter Morgan Hardy on violin. Hardy performed a ballad about Sojourner Truth, an African-American abolitionist and women’s rights activist born into slavery and known for her “Ain’t I a Woman?” speech, decrying the treatment of black women, delivered at the Women’s Convention in Ohio in 1851.