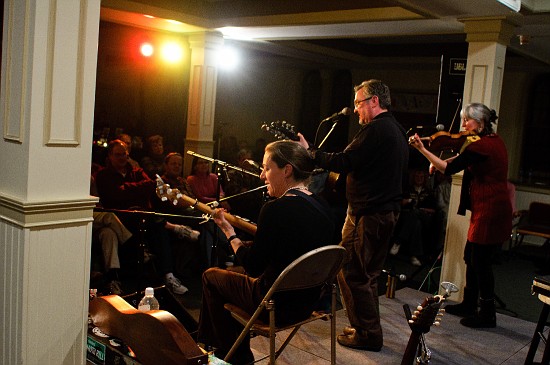 The Atwater-Donnelly Trio perform in Mansfield at the Rose Garden Coffeehouse on Jan. 15, 2011. Photo by Stephen Ide

About 100 people set aside the NFL playoffs and went out in the light snow Saturday, Jan. 15, 2011 to see the Atwater-Donnelly Trio at the Rose Garden Coffeehouse in Mansfield, Mass. They were not disappointed.

The Rhode-Island-based husband-wife duo of Elwood Donnelly and Aubrey Atwater, both multi-instrumentalists, were joined by frequent bandmate Cathy Clasper-Torch on fiddle, cello and vocals. The music was warm and uplifting, a mix of clever traditional ballads, original tunes and dance from Atwater.

Here are several of the songs performed that evening:

There were a couple of highlights from the evening. Aubrey Atwater, who has learned traditional clogging on her own, gave a demonstration, explaining the steps as she danced. Here it is, broken out from the playlist above:

Also, Cathy Clasper-Torch, in her soft, storytelling voice performed a tongue-twister called “Prinderella.” There’s no easy way to describe her story. You just have to hear it and channel your inner child: