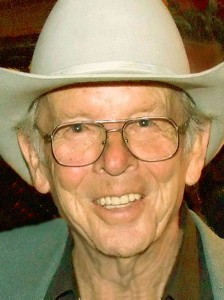 Fans of bluegrass and country music today are mourning the loss of Charlie Louvin, who lost his battle this morning with pancreatic cancer. He was 83.

Though known as one of the legendary Louvin Brothers, Charlie was born on July 7, 1927 as Charles Elzer Loudermilk in Henager, Alabama. Together with his brother Ira, the duo sang traditional and gospel music in distinctive harmonies. The pair was known for their brother-harmony style of singing, as were other pairs like the Monroe Brothers and the Blue Sky Boys, with voices that blended naturally partly because of their genetics. Ira Louvin died in a car accident in 1965.

In 1992, Charlie and Ira received the Distinguished Achievement Award from the International Bluegrass Music Association.

“After Charlie left the act briefly in 1945 to serve in World War II, the brothers moved first to Knoxville and later to Memphis, working as postal clerks by day while making appearances in the evening. Another brief disbandment due to Charlie’s service in the Korean War led to the brothers’ relocation to Birmingham, Alabama.

“Primarily known as gospel artists, the Louvins were convinced by a sponsor that “you can’t sell tobacco with gospel music,” and began adding secular music to their repertoire. They began making appearances on the famed Grand Ole Opry during the 1950s, becoming official members in 1955. The Louvin Brothers released numerous singles, such as “Little Reasons,” with over 20 recordings reaching the country music charts. Their rich harmonies served as an influence to later artists such as Emmylou Harris, Gram Parsons and The Byrds.”

The Tennessean in Nashville ran this photo galley of Charlie over the years. Charlie was performing until recently and his music is available on True North Records. Visit their web site to read the official press release on Charlie’s death and to hear more of his music.

Click to hear a recent interview with Charlie in which he discusses his career.

And below are some videos that display the brothers’ distinctive sound:

I Can’t Keep You in Love with Me

If I Could Only Win Your Love