It’s been 11 years since Vance Gilbert has performed at Mansfield’s Rose Garden Coffeehouse, and since then his popularity has skyrocketed. He returns this Saturday, May 21, 2011, as the final act of the 2010-2011 Rose Garden season, the main act after the annual performing songwriters competition. The contest this year features two Massachusetts performers and one from Seattle. 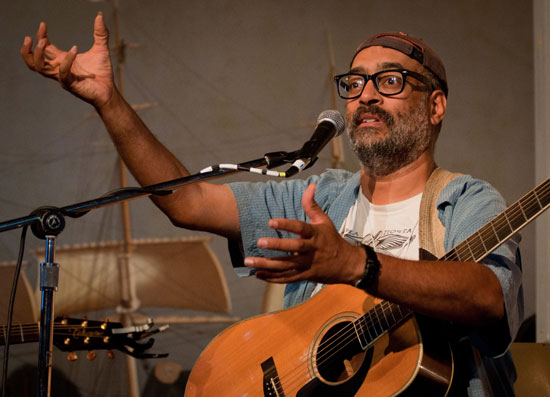 Vance Gilbert first came to the Boston music scene in the early 90s. One of the first times I heard his music was at the Great Woods Folk Festival in the early 90s. There he won the songwriting contest playing an old nylon-stringed guitar with heartwarming songs and his out-front, honest personality. He has since progressed to steel strings, but his pension for evocative performances, with frequent comedic blasts, have propelled his musical style over the years, gaining him fans in multiple music circles.

His music varies from tender folk ballads to spiritual melodies, delving into truths about humanity and real people. He is also a complete showman. He has fun with everyone and everything. His stage persona is riveting and magical. As a photographer, I can’t remember a time he didn’t mug for the camera or simply make fun of me from the stage. It’s part of the act. And if the crowd responds — and they always do — he is quick with a comeback. Such are the nature of Vance’s shows. They are heartfelt and performance art. The audience comes away thoroughly engaged and entertained.

Here he is spoofing a rapper:

In the songwriting contest, now in its 19th year, three performers will play two songs each to open the evening’s show. The performers include Ron Carlson of North Oxford, Mass., Tom Gizzi of Lenox, Mass., and Charlie Loesel of Seattle. Lest you think that this is a homer’s contest, last year’s winner, Larry Murante, was from Seattle. The contest’s popularity over the years has drawn performers from all over the country. It’s become a feather in the cap just to become a finalist from the multiple dozens of entrants.