Fiddlers Julie Metcalf and Andy Reiner will perform at Loring-Greenough House, 12 South St, Boston on Saturday, Feb. 4, 2012. Metcalf  has immersed herself in traditional folk and contemporary styles of music, including Celtic, Appalachian, bluegrass, jazz, and Latin music. She is a graduate of Berklee College of Music with a degree in Violin Performance. Reiner tours with Blue Moose and the Unbuttoned Zippers, The Earth Stringband, and Intergalactic Blam as well as teaching lessons, composing, and running his own production and publishing companies. 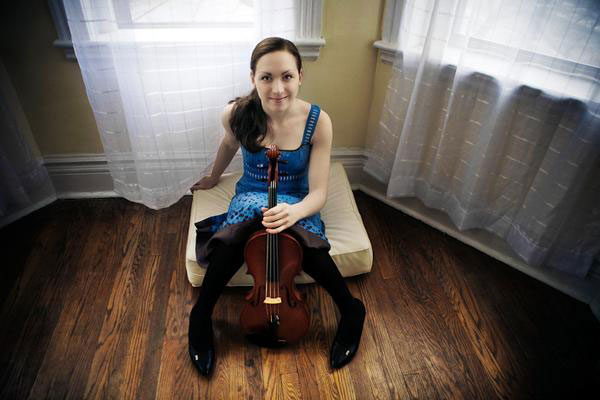 She began as a classical violinist in Worcester, Mass. Coming from a family of musicians, she was encouraged to make music from an early age. She picked up the violin when she was 4 and has been playing ever since. When she was 12, Metcalf discovered fiddle music and jazz through PBS and country radio, and began learning Celtic tunes on her own. She studied classical violin at Boston University’s College of Fine Arts.

Reiner grew up in a musical family in Lexington, Mass., and now lives in Brighton. He began playing at age 5, learning fiddle from his father, (award-winning and Mel Bay Published Author) Dave Reiner, as well as taking classical violin lessons. Just when the young Andy was struggling with the issues of whether playing the fiddle was “cool”, attending Mark O’Connor’s Fiddle Camp in Tennessee in ’97 and ’98 changed his life forever.

In high school, Reiner participated in a renowned jazz program which helped open him up to various styles. He was obsessed with heavy metal, which, combined with his love for traditional folk music, resulted in the fiddle speed metal band called Devil In The Kitchen. He entered and won many fiddle contests, most notably at the Lowell, Mass. Banjo and Fiddle Contests, where he has won 1st in Bluegrass Fiddle, 1st in Ethnic Fiddle, three 1sts in Twin Fiddle, and the Andy Wolf Award for Musical Excellence.

Reiner moved to Boston and earned his degree in violin performance from Berklee College of Music, graduating in May 2008. Through his mentors at Berklee – Eugene Friesen, Mimi Rabson, Christian Howes, Stephen Webber, Bruno Raberg, and many others – Reiner further developed his sound, ears and chops.

Along the way, two original pieces of his were performed in the Berklee Performance Center by the Berklee String Orchestra, and he shared the stage with Herbie Hancock, Paul Simon, Gloria Estefan and more at Berklee’s 60th Anniversary Concert, which sold out the Wang Center in Boston.

He developed a network of hardcore jammers who would descend upon his apartment, “The Fiddle Barn.” Berklee proved fertile ground for meeting unbelievable musicians. Between jamming and gigs, he met all the future band members of Blue Moose and the Unbuttoned Zippers and FiddleFoxx. Stash Wyslouch, guitarist of Devil In The Kitchen, was finally convinced after a year of studying civil engineering at Tufts, to come to Berklee to focus on music. The two are musical soulmates of groove, traveling in countless wacky situations and playing music everywhere from Montreal to Berlin.

The suggested donation for the show is $10, plus a $1 preservation fee. For more information about the show, visit the notloB Folk Concerts web site. notloB Folk Concerts has produced close to 100 not-for-profit concerts in the greater Boston area since 2007. The series is volunteer-run; 100% of the donations go to the musicians and production expenses.aditional and revival folk, Celtic, bluegrass and blues artists to audiences in the greater Boston area.