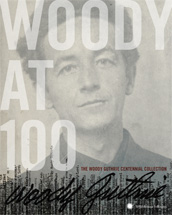 Smithsonian Folkways today released a celebration of folk singer Woody Guthrie, who would have turned 100 on July 14, 2012. To accompany the release, a video showing the making of the project gives some insight into the thinking of the project and the nature of the special material included in it. The video includes a backdrop of music from Guthrie, known famously for his song “This Land is Your Land.” But Woody was an iconic figure of the Dust Bowl era of the 1930s. His songs were of the struggle of migrant workers and of heroes of the day, like “Pretty Boy Floyd.”

The Smithsonian Folkways project, called “Woody at 100: The Woody Guthrie Centennial Collection,” contains a 3-CD set with 57 of Woody’s songs, including some of the first ones he ever recorded, along with a 150-page book. The video shows images of Woody’s drawings, lyrics and an overview by co-producers Robert Santelli, Santelli, executive director of the GRAMMY Museum, and Jeff Place, GRAMMY-winning archivist for the Smithsonian Center for Folklife and Cultural Heritage.