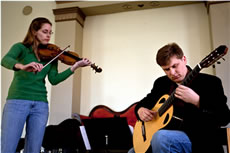 The unique gypsy swing ensemble The New Boston Duo offers a different take on classical and other forms of music. Violinist Elizabeth Burke and Guitarist George Little take their instruments on twists and turns from their core of gypsy swing to strains of jazz, rock, Celtic and flamenco music. The duo will perform at 7:30 p.m. Friday, Sept. 21, 2012 at the Edward M. Pickman Concert Hall at the Longy School of Music, 27 Garden St., Cambridge.

The pair’s sound is eclectic and progressive. Inspired by the Django Reinhardt,  Stephane Grappelli and the Latin-American music of Piazzolla, the duo has developed their own arrangements of familiar melodies.

Opening for The New Boston Duo is guitarist Scott Oullette, a student at Berklee College of Music, focusing on Latin-American and Brazilian guitar styles.

Tickets are $15 per person in advance or $20 at the door, with discount tickets available to Longy students student ID for $10.  Tickets may be purchased by visiting http://www.mktix.com/nbd, or at the door, if seats are still available.