VIDEOS: Brother Sun, The Nields and more in region this weekend

April is a busy month in folk and bluegrass music on the South Shore of Massachusetts. From remarkable harmonies to recalling music from the folk tradition, the next few weeks offer a plethora of styles and great music. It all starts this Saturday, April 6, with the trio of Brother Sun at Mansfield’s Rose Garden Coffeehouse, and The Nields at Franklin’s Circle of Friends Coffeehouse, along with Michael Troy and Bill Motte, splitting the bill at Kingston’s Beal House. 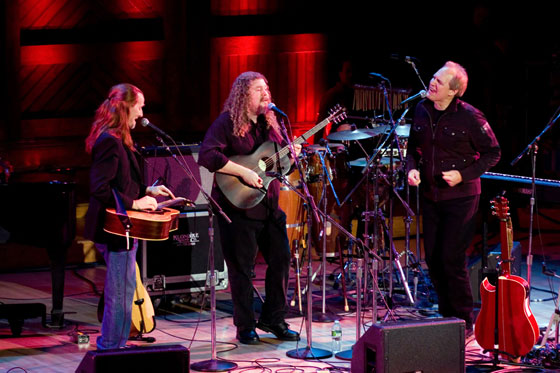 Brother Sun makes its first appearance at The Rose Garden Coffeehouse in Mansfield on Saturday, but each of its members have performed there individually before.

Joe Jencks, Greg Greenway and Pat Wictor are veteran singer-songwriters. Together they are a clarion call of fine harmonies and a cappella singing, a rousing amalgam of folk, Americana, blues, pop, jazz and rock that is as diverse as the trio’s backgrounds. Their combined musical skills make for an unforgettable experience – three rich voices blending on a well-crafted foundation of guitar, slide guitar, bouzouki and piano. They have been headliners at popular folk festivals, including Falcon Ridge, the Kerrville (Texas) Folk Festival, the Philadelphia Folk Festival and at Old Songs (Altamont, N.Y.)

For more information on the Rose Garden show, visit its website.

Nerissa and Katryna Nields, sisters known for their incredible positive energy and gorgeous harmonies, have been the darlings of the coffeehouse/festival scene since 1991 (read their history).

Their recent 15th CD, “The Full Catastrophe”, is a powerful, passionate, thoughtful, humorous work that explores the crazy ride that is this insane twenty-first century idea that in a post-feminist world it might somehow be possible for a woman to raise her children, maintain her relationship and career and contribution to her community while tending to her artistic soul at the same time. The CD title is taken from Zorba the Greek, “I’m a man, so I married. Wife, children, house, everything. The full catastrophe.”

Opening for The Nields will be folksinger Jesse Hanson.

For more information about The Nields show at Circle of Friends, visit the website.

Fall River native Michael Troy, who recently performed at the Rose Garden, will split the bill with Bill Motte at the Beal House in Kingston, run by the South Shore Folk Music Club. This pair of fine balladeers offers an evening of lyrical storytelling.

Troy has spent parts of his own life as a mill worker, fisherman, laborer and carpenter. He’s a husband and father, and his songs reflect his travels, as well as the lives of people he has met and interacted with. His rich baritone overlies his evocative finger-picked guitar. His honest approach to performing instantly wins him new fans.

Motte’s songs also delve into his personal experiences, and he is well-known as a classic on the South Shore. He has been described as “a literate and astute observer of human interactions.”The wry commentary in his precisely chosen lyrics and engaging performance leaves listeners really feeling the emotions evoked in the stories he weaves in his songs.

For more about the show, visit the website for the South Shore Folk Music Club.

Also coming up in the area:

Brockton’s Javawocky Coffeehouse will feature the bluegrass of Southern Rail.