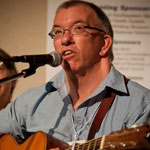 Archie Fisher, James Keelaghan and Jez Lowe. Three of the world’s finest songwriters and most respected singers have decided to take their friendship on the road. Meeting on a cruise, they found that their music has a great synergy. When they again found themselves staying in the same house last autumn, the idea for the tour was born. The trio will perform individually and together at 8 p.m. on Thursday, April 9, 2015 at the Somerville Armory, 191 Highland Ave, Somerville, Mass.

Archie Fisher, James Keelaghan and Jez Lowe will perform on April 9 in a benefit for FOLK New England.

He is Scotland’s foremost Folk music troubadour. Recognized for his contributions to Scottish folk music, he was inducted into the Scots Traditional Music Hall of Fame and in 2006 was awarded an MBE (Member of the British Empire), a prestigious honor nominated by his peers and bestowed by Queen Elizabeth.

Called one of Canada’s finest singer-songwriters, this poet laureate of the folk and roots music world has gone about his work with a combination of passion, intent and intensity, and curiosity. Fusing his insatiable appetite for finding the next unique storyline Keelaghan also forges his pieces with brilliantly defined craftsmanship and a monogrammed artistic vision, making him one of the most distinctive and readily identifiable voices the international singer-songwriter community.

Jez is a BBC Radio 2 Folk Awards 2015 Nominee for ‘Best Original Song’ for The Pitmen Poets and ‘Folksinger of the Year’. Jez Lowe has built an enviable reputation as a songwriter and performer in the world of acoustic music, and as a recognized musical ambassador for his native North East England, with more than a dozen albums and countless live performances around the world over the past 20 years.

Founded by Betsy Siggins in 2009, FOLK New England’s mission is to document, preserve, interpret and present the ongoing cultural legacy of folk music in all its forms, with emphasis on New England’s contribution to the enrichment of North American life. FOLK New England creates a dialogue between the history of folk music and the future of folk, through robust collections development, multi-disciplinary education, and engaging entertainment programs for the public.

FOLK New England is a 6-year old non-profit organization based in Massachusetts, not far from Harvard Square where the folk music revival of the 1960s kicked off a cultural revolution. It is a living repository of folk music history materials, featuring 50 year-old audio recordings of rare performances and interviews; a photograph collection documenting the past and the active present of folk music; and a growing archive of personal papers, folk journals, and ephemera related to the folk music scene.