Christine Lavin & Don White, plus contest, in Mansfield on Saturday 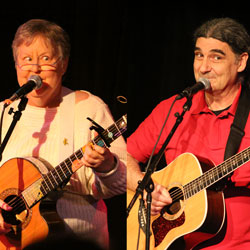 Folk singers and humorists Don White and Christine Lavin help the Rose Garden Coffeehouse conclude its 27th season on Saturday, May 21. Like every recent finale at the longtime Mansfield venue, the show will be preceded by the annual Performing Songwriter Contest, featuring singer-songwriters from Connecticut, Rhode Island and one who is a native of Massachusetts. The show starts at 8 p.m.

“When Christine Lavin and Don White make us laugh, there is always a warm shimmer of community beneath the silliness,” says renowned folk music writer and author Scott Alarik. “Of all the gifts great entertainers can bring to the stage, I think this is perhaps the rarest and most valuable. Many can dazzle us; but only the very, very best can befriend us, and remind us that, in the end, we are all wary acrobats in the great human circus. And really, when have we ever needed laughs like that more?” 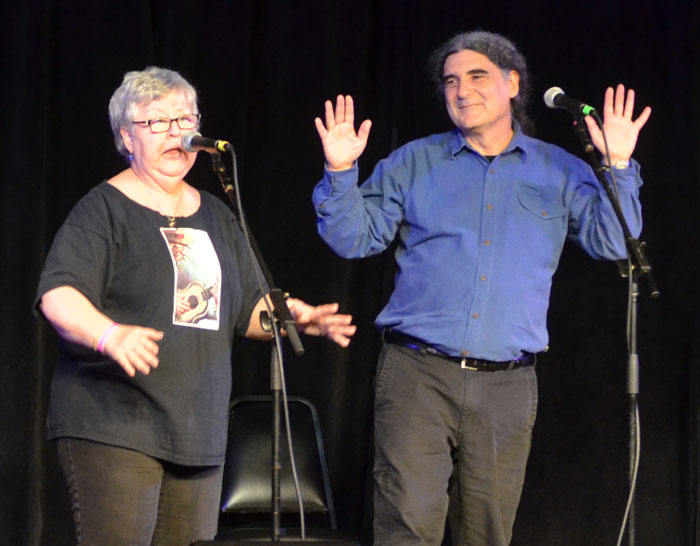 The Lavin-White combo, which began in 1995, is indeed unique in the local annals of folk music. Lavin, a solo performer and former member of the Bitchin’ Babes, and White, a wry songwriter from Lynn, will perform individually, then together, at Saturday’s show.

“It doesn’t sound like a folk concert, it sounds like a comedy concert,” says White. “We rehearse and we rehearse and then inevitably, she’ll throw something at me that I have no idea about, with a mischievous grin that lets me know she’s been thinking about it all afternoon. Just to see what will happen. And she’s taught me to do the same.”

White has survived and thrived for 25 years, bringing his audiences to laughter and tears in his live performances, studio recordings, and on the printed page. He is a storyteller-comedian-author-troubadour-folk singer-songwriter. He is a walking challenge to the phrase “file under.” Don’s approach to music is a weird, unique blend. If he just played folk music, it would be a handy label. But he has invented his own genre with a mix of humor and powerful songwriting.

Truth is, it is also nearly impossible to sum up Christine Lavin in a few sentences. She is an award-winning iconic singer-songwriter, author and more who has earned her legendary status through years of tireless performing, doing shows at once quirky, hilarious and touching. Her songs have a wordsmith’s eye for detail, with a comic’s vision for the absurd, and a huge and fearless heart that will go anywhere … and who else baton twirls, knits with her audience before a show, and does their nails?

In addition to the Lavin-White show, the evening will begin with the Rose Garden’s 24th yearly Performing Songwriter Competition. This year, the finalists include three New England acts: Seamus Galligan, of Providence, R.I. (a native of Fall River, Mass.); Joanne Lurgio, of Warwick, R.I., and Ian Meadows, of Chester, Conn.

“It’s one of our favorite shows of the year,” says Stephen Ide, artistic director for the Rose Garden. “From the beginning, the competition was designed to give start-up musicians a chance to shine in front of a large audience. That’s why we hold the contest before the main act, usually a very well-known act, which ends our season.

“There are so many musicians in New England and so many who want to perform here, that it’s made the contest a nationally known event,” Ide said. “You just never know. We might be bringing to our audience three artists who are on their way to fame in their own right. We hope we can be a stepping stone for them.”

The contest was begun years ago by co-founder Samuel “Mac” McLanahan, who died in December 2014. It was his hope to give relatively unknown folk singers a chance to perform before a decently sized audience, sometimes bigger than they had every played in front of before.

“A good song has to start with a good, original idea,” McLanahan said in 2009. “To me, the best songs are about topics that haven’t already been covered over and over. We look for the quality of voice and the instrumental accompaniment. Then, when the finalist gets to the actual performance on Saturday, the judges will also be looking at stage presence and how well the performer presents himself or herself in a live situation.”

Doors open for the 8 p.m. show at 7:30 p.m. Advance sale tickets are recommended ($20 + service fee) and may be purchased at www.rosegardenfolk.com. Tickets are also available at the door ($22). The Rose Garden’s all-volunteer staff serves home-baked dessert items and hot and cold drinks of the season before the show and during intermission. The Rose Garden Coffeehouse, is a 501(c)(3) not-for-profit organization entering its 27th season of continuous operation. It is located at The Congregational Church of Mansfield, 17 West St., Mansfield, Mass., and is wheelchair-accessible and alcohol-free.