Texas transplant Monica Rizzio makes her way from the Cape to Mansfield’s Rose Garden Coffeehouse on Saturday, bringing with her an intimate set of songs and contemporary folk that reflect a captivating sound and a new direction she’s found in her life. Opening for Rizzio will be Marblehead performing songwriter Jim Trick.

Rizzio, former frontwoman for the folk quartet Tripping Lily, took a new direction in her life after leaving the group. It has allowed her to explore songwriting in a new way. I asked Rizzio a few questions about her and her music as she makes her way to Mansfield on Saturday. 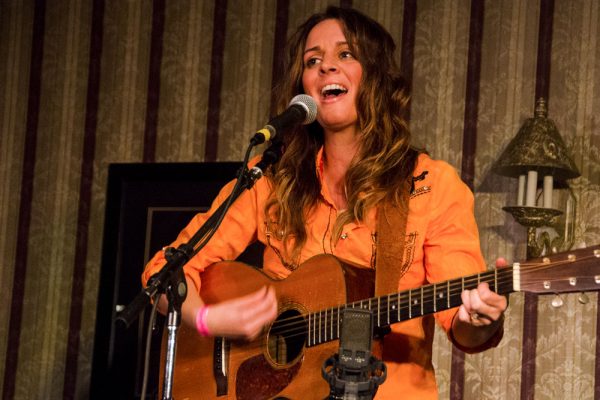 Monica Rizzio performs at the Northeast Regional Folk Alliance Conference in New York in 2015. Rizzio will be the featured act at Saturday’s Rose Garden Coffeehouse in Mansfield, Mass. Photo by Stephen Ide

Q: How has your music evolved since moving from Texas to Massachusetts? How has it changed since leaving Tripping Lily?

RIZZIO: With Tripping Lily, which really started in Nashville before moving to the Cape, we really embraced a contemporary folk sound that was based more upon the orchestration of instruments and harmonies in a collaborative way. I was young and impressionable with the sounds that were being created in the New England music scene but deep down that was not who I was as a person. I was raised on a ranch in East Texas, we rode horses, listened to Buck Owens, and went to church, sometimes three times a week, and now my life had evolved into something so foreign to what I had always known. As a musician and a person I felt empty, because for me music is my life, and if my music did not represent my life and was just a sound, as magical as it may be, it still did not feel true. My music is a like a geographical cocktail, one part New England Folk, one part Texas.

Q: The folk crowd can be an intimate one. When you are performing, what do you hope your audience can take away from your music and your performance? 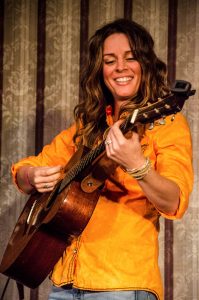 RIZZIO: The beauty of folk music is the story. As artists we bring our stories to life through song, hopefully in an energetic, unique arrangement. My songs are authentic, often times auto-biographical, and I spent a lot of time arranging the songs and stories so that not only the words resonate with people but the vibe of the songs moves them.

Q: It’s been a highly charged political season, something many so-called “folk” musicians tend to dig their teeth into. But your songs tend to be more of a personal nature. Do you avoid the political landscape in your music? Will you be bringing any new songs to the stage when you perform on Oct. 22? What can the audience expect?

RIZZIO: My songs are definitely personal by nature and for the most part I stray from using songs in the political landscape. Instead of using song as a vehicle for action, I founded a 100% volunteer based non-profit, Vinegrass, which produces concerts and festivals with up-and-coming bands in the Roots genre in order to provide scholarships, instruments, and grants for music students, schools and musicians on Cape Cod. In just shy of three years we have awarded over $15,000. My songs will most likely be new to most of your audience peppered with songs that have struck my chord. I have a deep well to draw from, every audience is different, and my songs always take the shape of the audience because they are the ultimate rhythm section. Every show is different, that’s the beauty of live music. 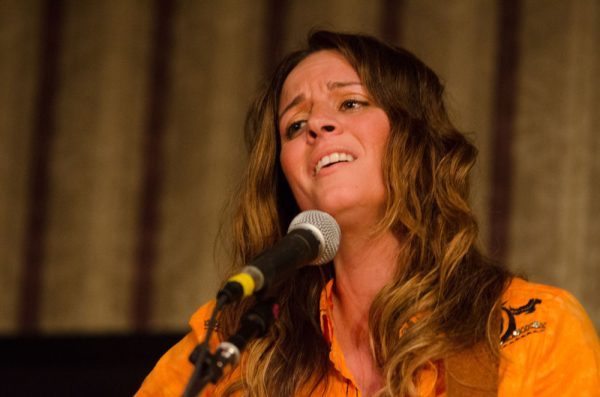 Q: The Rose Garden is in its 28th season, but there are lots of NE coffeehouses that have been around even longer, with loyal audiences. As a transplant to the region, even though you have been here for some time, what do you feel you bring to the stage that makes your show different or unique?

RIZZIO: Folk music is evolving as our society is evolving. The one constant is the power of live music and the effect that it has on people. A lot of musicians I know just perform, but I love going out to see live music, to see how how an artists songs blends with an audience and the social setting it is presented in is magical. There is a reason why coffeehouses have existed for so long in New England and it is a testament to the power of live music. To see an artist pour their heart and soul into a song is what I live for and is exactly what the Rose Garden audience will experience by listening to my songs.