It’s difficult to pin down the music of Heather Pierson. At one moment, she is singing a heartfelt ballad on guitar, the next she could be singing soulfully from behind her piano, and then there’s the occasional banjo. The one thing you can say about Pierson is that you don’t know exactly what to expect. And that will be half the fun when she performs at 8 p.m. this  Saturday, March 24, at Mansfield’s Rose Garden Coffeehouse. 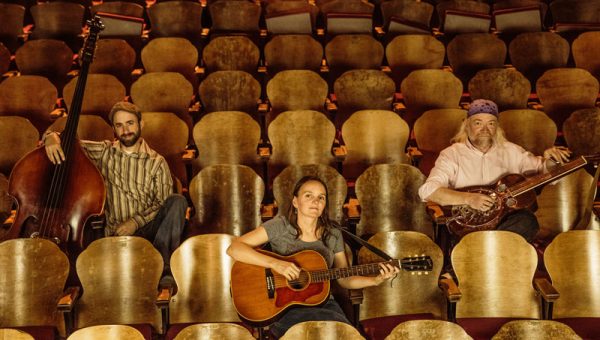 The Rose Garden first heard Pierson at the Northeast Regional Folk Alliance Conference, a musical gathering unlike many others, where performers from all over showcase their work. Pierson, an award-winning pianist, multi-genre singer/songwriter, multi-instrumentalist, arranger, bandleader and performer, stood out.

From New Orleans-style jazz and blues to rousing Americana and poignant folk narratives, Pierson’s memorable, intimate, and cathartic live performances feature her virtuosity on piano, her bell-tone vocals and her commanding yet playful stage presence while wielding a tenor banjo, melodica, ukulele, or acoustic guitar. Joining her at the March 24 show at the Rose Garden will be the rest of her acoustic trio: Davy Sturtevant on guitar, mandolin, dobro, fiddle, cornet, and Shawn Nadeau on bass.

“There’s a real pureness to her voice as she leads us through intimate corners of her experiences and tells stories with a Joni Mitchell kind of edge…,” writes The Portland Press Herald.

“She’s as comfortable and adept with bluegrass as she is with jazz,” says Al Kniola, of WVPE Public Radio. “With Heather, there is absolutely nothing not to like. Don’t you dare miss an opportunity to hear her live or to purchase her recordings.”

Throughout her colorful career, Pierson’s eclectic skill set continues to propel her onto concert hall stages and into barrooms, coffeehouses, resort hotels, living rooms and churches, performing more than 200 shows a year.

The Rose Garden Coffeehouse, is a 501(c)(3) not-for-profit organization in its 29th season of continuous operation. The event will start at 8 p.m. and is held at the Congregational Church, 17 West St., Mansfield, Massachusetts. The doors open at 7:30. It’s wheelchair-accessible and alcohol-free. Tickets can be purchased online at www.rosegardenfolk.com or http://bit.ly/RG18Heather for $16, or for $20 at door. The Rose Garden’s all-volunteer staff serves home-baked dessert items and hot and cold drinks of the season before the show and during intermission.