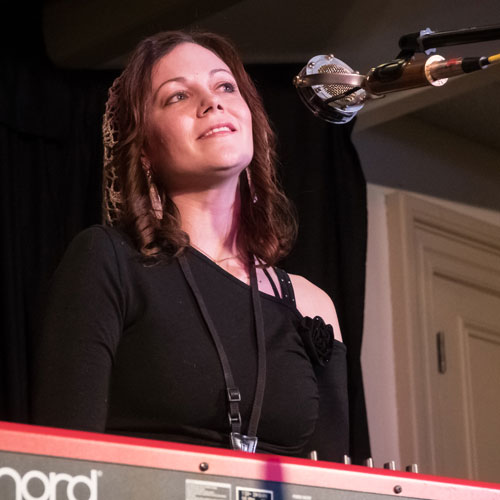 Farnham, who lives in Pomfret Center, Connecticut, commented that she was looking forward to seeing the “triple-threat” from fiddler, singer and step dancer April Verch, the featured act of the evening. It was hard to tell whether Farnham, a multi-instrumentalist herself, was joking when she commented early on that she was working on her step dancing. 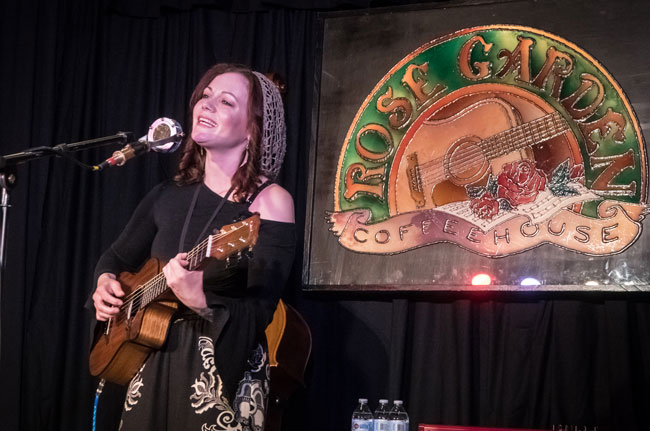 A songstress with a soaring and lilting voice, she draws from a classical and theatrical background. Her first song was a love song called “Elijah,” which she played on keyboards.

They say he’s wild as the rising sun,
shooting over horizon after horizon.
They say he’s a straight shot burn, no chaser,
and I’m a whiskey shooting gambler for his love.

Next, she picked up a “guitalele,” a ukulele-sized guitar the petite singer called “Kala-sized.” She played a song called “David,” which was “inspired by a conversation that I had with a friend of mine who is a veteran,” she said. “And one day, a few months back, we sat down and he told me his whole life story leading into what got him into the service. And it was just such a moving story I had to capture it in song.”

The song touches on themes of a hard-lived life and coping with bullying:

David was a smart kid, he knew he had to do something.
One day he rallied up the other bullied ones,
Said, “there’s strength in numbers, and together we can fight this”
And they did. Nobody’s bothered those kids since.
That’s how David learned to fight for justice.

Farnham recently released her second album, “Samadhi: Home Is Where You Are,” which was nominated for Rhode Island’s Motif Music Awards as the “Best Americana Album” and hailed by Bill Copeland Music News as “soulful Americana.”

The prize for winning the contest was $100 and a gig next season at the Rose Garden. Farnham is scheduled to perform a split bill with the Bridgewater duo Andy & Judy on Feb. 22, 2020.

Farnham faced off against two Massachusetts guitarists and singer-songwriters: Mark Stepakoff of Wayland and Tim Sawyer of Cambridge.

Stepakoff’s songs dealt with the fleeting nature of life (“Settles Like Dust”) and new beginnings (“New Moon”). Stepakoff, who hosts the biweekly folk open mic at the Center for the Arts in Natick, has headlined at Cambridge’s Club Passim and many other local venues.

Sawyer played a serious song about time and love (“What Do I Know?”) and had the audience laughing and enjoying his vocal inflections with a hilarious song called “Where’s the ‘R’ in Massachusetts.” In the ’60s, Sawyer was swept up in the vibrant folk scene in his native San Francisco. He has played coffeehouses in the region and as an actor and singer, he has performed in numerous theatrical productions throughout New England.

Judging the contest was Jess Phaneuf, the music director at MVYRADIO on Martha’s Vineyard, where she hosts the new music show, “Uncharted Waters.” She has worked for venues including Club Passim in Cambridge and the Narrows Center for the Arts in Fall River. The other judge was Rick Foster, a former writer for The Sun Chronicle in Attleboro and a musician, songwriter and former music showcase co-host.

The Rose Garden Coffeehouse is a 501(3)(c) nonprofit held at the Congregational Church, 17 West St., Mansfield, and Saturday’s show completed its 30th season. The Rose Garden is supported, in part, by the Mansfield chapter of the Massachusetts Cultural Council.